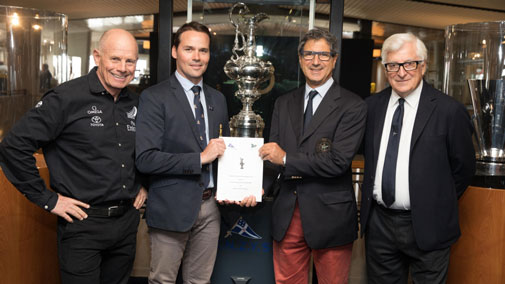 THE ANNOUNCEMENT OF THE PROTOCOL OF THE 36TH AMERICA’S CUP
The Protocol of the 36th America’s Cup was released today at the Royal New Zealand Yacht Squadron after a focused and friendly period of negotiation between the Defender and the Challenger of Record Circolo della Vela Sicilia following Emirates Team New Zealand’s victory in the America’s Cup only three months ago in Bermuda.
This Protocol is intended to reflect the true spirit of the America’s Cup established by The Deed of Gift (a perpetual challenge cup for friendly competition between foreign countries) whilst pioneering high-performance technology, inspiring sports fans around the world and uniting the sailing world.
Emirates Team New Zealand CEO Grant Dalton presented the Protocol globally via Facebook Live and outlined the roadmap and rules that the 36th America’s Cup will be sailed under.
“It gives me great privilege to release the Protocol today.” said Dalton
“From the moment we won we have felt a responsibility to release this document as soon as possible to provide the required details that potential teams can now base a challenge on.”
“The plans are coming together nicely – we shall have a very exciting boat that will be fast and powerful. We are pushing the boundaries of what is possible technically and this will test the designers, boat builders and the sailors to the limit. Just what the America’s Cup is all about”
With the return to monohulls confirmed earlier this month, it was today announced that the AC75 Class of boat will be a 75 foot high performance monohull governed by the AC75 Class Rule which will be published by the 31st March 2018, with initial concepts of the class being released to key stakeholders by the end of November 2017.
Dalton also confirmed that PRADA has secured the right to be the exclusive naming and presenting sponsor of all events comprising the 36th America’s Cup including the Challenger Selection Series, which will officially be named The PRADA Cup.
The dates and venue of both the America’s Cup Match and The PRADA Cup will be announced by 31st August 2018. The intended venue is Auckland, New Zealand with the Match to be raced in March 2021, preceded by The Prada Cup in January and February 2021.
A series of preliminary regattas will be raced internationally in 2019 & 2020 in the AC75 Class boats, culminating with a Christmas Regatta in December 2020 for all competitors.
Each competitor is permitted to build two boats, the hulls of which must be laminated in the country of the competitor. The first boat is not permitted to be launched prior to 31st March 2019, the second can be launched after the 1st February 2020.
The rules stipulate that no two boat testing will be allowed, except by the Defender only during the period of racing in The PRADA Cup, as they will play no part in this stage of the competition.This decision, amongst others, plays true to the challenger/defender tradition of the America’s Cup throughout its long history which both negotiating parties were keen to embrace.
An increased emphasis has been placed in the rules around the nationality of the sailing crews when racing.
20% or three crew, whichever is higher, must be true nationals (i.e. citizens) of the competing yacht club. The remainder of the crew can be made up of residents of the challenging yacht club’s country defined by being physically present in that country for a minimum of 380 days over a 2-year period between September 2018 & 31st August 2020.
The Protocol has been negotiated to result in a fair and transparent event with cost containment at its centre to help attract as many quality challengers as possible.
Race Management will be entirely independent of the event organisation led by the Regatta Director. The umpires and jury that will manage all on the water rules and disputes for all events.
An independent Measurement Committee will manage the measurement process in accordance with the AC75 Class Rule.
An Arbitration Panel will oversee and deal with all Protocol disputes with published decisions to maintain the integrity of the event.
The Challenger of Record will organise the PRADA Cup and the Defender will organise the America’s Cup Match while cooperating with regards to commercial issues such as sponsorship and broadcast rights for the 36th America’s Cup as a whole.

GRANT DALTON: CEO Emirates Team New Zealand
“The release of the protocol just three months after the last race of the America’s Cup is the start line for all teams, existing or prospective, of the 36th America’s Cup campaign. This was a focused negotiation with the Challenger of Record but the common ground was to produce a Protocol that was fair first and foremost with a basis of both tradition and technology. We are also absolutely delighted that Prada, a global brand of the highest repute and style, will be joining us as the Title Sponsor on this exciting journey.”

PATRIZIO BERTELLI: President of Luna Rossa Challenge.
“Luna Rossa has welcomed the opportunity to be Challenger of Record for AC36 as a mark of confidence and support towards Team New Zealand and the new course given to the America'Cup. Indeed we could not have accepted this position in the last edition since the environment was not unbiased. After our withdrawal from AC35, we were glad to encourage Team New Zealand and today we renew our congratulations to Grant Dalton and his Team for their fantastic achievement.
Now the situation has completely changed: the original values of the Cup are being restored and the traditional prerogatives of each side preserved. Emirates Team New Zealand are longtime friends of Luna Rossa, while fully independent from each other, as was the case during AC 31st when Team New Zealand was the Defender and Luna Rossa the Challenger of Record.
The new Protocol has been negotiated bearing in mind the founding principles of the Deed of Gift, but with a strong innovative approach towards technical and sporting evolution of the Cup and the sport of sailing.
Because of this new promising trend, the management of Prada Group has decided to assume the prestigious yet demanding role of Title and Presenting Sponsor of the whole AC 36”

STEVE MAIR: Commodore of the Royal New Zealand Yacht Squadron
“The relationship between the Royal New Zealand Yacht Squadron and Circolo Dela Vela Sicilia has been entirely constructive and friendly throughout. It is a pleasure to work with Agostino Randazzo and we are certainly looking forward to all aspects of Americas Cup 36. In CVS we feel we have a fantastic challenger of record who certainly cherish the tradition of the cup as much as we do"

AGOSTINO RANDAZZO: Commodore of Circolo Della Vela Sicilia
“The choices agreed with the Defender have all gone in the right direction and I am particularly happy for the constructive spirit with which this Protocol has been negotiated by all parties. This Protocol truly reflects and respects the reference principles of the sport and of the Cup and I am therefore proud that our Club will be represented by Luna Rossa also in this edition of the America’s Cup, which opens a new and virtuous cycle for the most prestigious sailing trophy.” 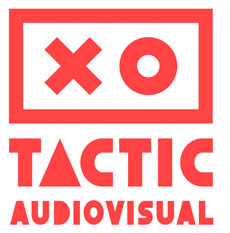 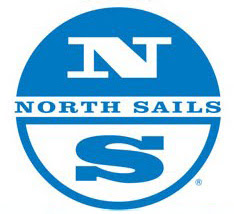 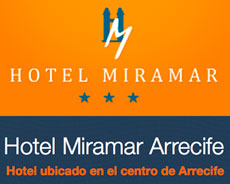 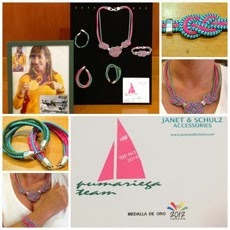 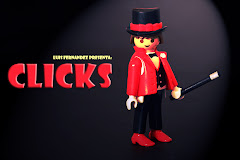